Phylesha Brown-Acton, Pasifika LGBTQI Whanau Ora Manager, is passionate about providing a support service with a holistic approach to working with Pasifika LGBTQI people and their families. 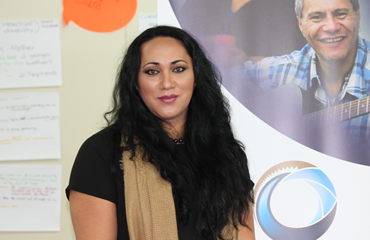 Phylesha chats with us about the service and her intervention statement at the Civil Society Hearing at the United Nations Headquarters in April.

LGBTQI stands for Lesbian, Gay, Bi-sexual, Transgender, Queer or Questioning and Intersex. An Auckland-based service, it looks after the welfare and interests of Pasifika LGBTQI and their families as well as the wider spectrum of gender identity terms from the Pacific. Some of these include fakafifine (from Niue), fa’afafine (Samoa), aka’vaine (Cook Islands) and fakaleiti (Tonga) communities.

Funded by Whanau Ora, it is the first specific support service in New Zealand provided by a Pacific Provider. Its support is extended to the Pasifika LGBTQI community in, but not limited to, the Auckland region.

The F’INE service was developed by Phylesha Brown-Acton, Pasifika LGBTQI Whanau Ora Manager, and is delivered in conjunction with Pacific Homecare to individuals and their families.

“Families gain access to appropriate services for lesbian, gay, bi-sexual and transgender individuals to overcome the many issues they face from day to day,” says Phylesha.

With more than 24 years of experience serving the Pacific LGBTQI community, Phylesha takes a holistic approach to the health and wellbeing of people in her community.

“One of the great things about this service is that 60% of its resource is contributed back to family.”

Phylesha says that although it’s not a significant resource, it provides a hand up to helping families with their self-determined goals, and provides them with some means to achieving them.

“My role is to hold their hand and walk with them step by step, providing them with navigational support. Culture is very significant to our people’s lives. It’s the way that we navigate our wellbeing. It underpins a sense of belonging, because it connects you to your language and land. 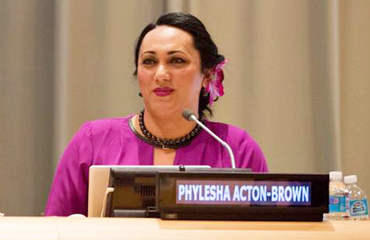 “We don’t operate in the same way that Palagi people do, where it’s a very individualistic approach.”

In Pacific communities there is emphasis on the collective approach so it’s important for Phylesha to work with families that have LGBTQI family members.

“We work with our families on employment issues, education, finance, debt reduction, budgeting and health, whether that be access, treatment, prevention, awareness – as well as culture, community and leadership.”

Sometimes viewed as a leader within the transgender community, Phylesha considers herself a human advocate as opposed to someone who only advocates for LBGTQI.

“I’m currently doing a Diploma in Child Protection studies because it’s what I believe in; advocating for the rights of the invisible and the voiceless.”

Known for her dancing, participation in sport and previous work in the HIV/AIDS sector, as well as advocacy work around the Pacific, Phylesha had her name submitted to speak at the Civil Society Preparatory Hearing in April.

it is part of the groundwork for the United Nations General Assembly High-Level Meeting on Ending AIDS in June 2016 in New York.

During her intervention statement she spoke about encouraging member states to name key affected population groups. Whilst preparing for her statement she knew key affected populations comprised of women, children, transgender peoples, indigenous people, gay men, MSM (men who have sex with men), and injecting drugs users but no one seemed to name or identify them as such.

“I thought ‘how could all of these people be lumped under one supposed population group?’

“When we talk, discuss and strategise, how are we meant to know that this is in relation to them when they’re not being named?

“Transgender people are often misrepresented as gay men or MSM, that is completely wrong.”

At a regional level F’INE works with an intersection of health and social professionals to foster a better understanding and supportive environments. An example of greater awareness and inclusion may be helping to alleviate incidents from occurring such as when you walk in to a medical centre appearing as female identifying, then having a frontline staff member refer to by using male pronouns.

With the support of Whanau Ora, LBGTQI services are free via Pacific Homecare.
For more information
Contact us on (09) 274 9153 to find out more

Opening Enjoyed by One and All