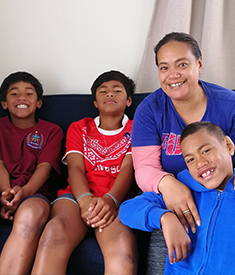 Twelve surgeries later, she was moved to the recovery unit where she underwent physio and speech therapy.
This was only the beginning of an uphill battle.
This served as motivation for Seini to focus on recovering as quickly and safely as possible so she can get back to her children. She understood that this could only be achieved through determination and hard work.

Seini Taulaua is a mother of five (one of whom has a mental development disorder) whose superpower is strength and resilience.

No stranger to the “hard life” Seini overcomes major obstacles for the love of her children.

Bouncing back from incredible obstacles builds a strong character. One that has molded thirty-eight-year-old Seini, who refuses to let her trauma define her. Instead, she has turned it into the pivotal moment in her life.

On the night of March 25th, 2018 Seini lay sleeping in her home in South Auckland, when her uncle who was boarding with them at the time, had a mental breakdown and viciously attacked her with a spade and a machete. Her injuries were so severe that it put her in a coma for five days. Twelve surgeries later, she was moved to the recovery unit where she underwent physio and speech therapy.

This was only the beginning of an uphill battle.

Seini had extensive and complicated surgeries, including two brain surgeries. The operations done to were to fix her broken hand, chest, and her broken jaw. This meant that the hospital was home to Seini for the next year and a half.

With no-one at home to take care of them, the children were placed with their dad to live with him and his family.

This served as motivation for Seini to focus on recovering as quickly and safely as possible so she can get back to her children. She understood that this could only be achieved through determination and hard work.

To keep focused, Seini shut herself in in rehab and stopped all visitations so she could work on her recovery without distractions or deterrents.

Her sacrifices paid off when she made remarkable progress and was discharged from hospital on the 18th of May 2018. Eighteen months ahead of schedule!

Given the situation, the children’s dad thought it was best they stay with him, so he filed for full custody.

The children were her life and all she had left, so the first order of business for Seini was getting them back.

And so begins the custody court battles

When we spoke in October 2018, Seini was happy to report that she was successful in her battle and has three of her children back with her.

Together the family have slowly begun to pick up the pieces and rebuild their life together in their new home in Otara.

Today three of the five children are back living with their mum. Each attends local schools while Seini “holds down the fort” at home, till she has been cleared to return to paid employment.

The term ‘start from scratch’ was not used loosely to describe Seini’s situation.

After surviving the attack, striving for a quick recovery, and battling the courts for her children, Seini learned that every piece of item they owned was stolen from their home while she was in the hospital.

What makes Seini an amazing human being is her strength, resilience and the fact that she still has a positive outlook on life.

Of course, there were many working horses in the background that supported Seini in her time of hardships.

As a Whanau Ora provider, Pacific Homecare are blessed to have the capability to support and empower Seini. As a Whanau Ora client Seini felt that for the first time someone wanted to genuinely help her to do better.

“…… At first, I thought I would just go to them for shopping or when I needed things, but then they made me set goals which was new to me! But when we sat down to write the goals, I found that I actually had a lot I wanted to achieve”

Seini was happy to report in our meeting in October 2018 that she had completed her level 4 Social Services certificate. She hopes to one day apply her new learnings and give back to the community.

“I would love to work with community centres like Women’s Refuge, etc, one day. That’s my area of interest”

Seini works with full-time Whanau Ora navigator Mama John and continues to strive towards her goals which are:
– Getting her left hand fully functional by attending physiotherapy classes and doing the exercises at home
– Being able to drive again
– Weightloss journey

Mama has since supported Seini and her family through Whanau Ora to get back on their feet again while still striving towards their goals. Taking it one day at a time.

“Whanau Ora’s about empowering families. We focus on four areas – finance, health, education and community, and culture. When families come into Pacific Homecare that need assistance in those areas, we help them set goals for themselves and work towards independence.” Says Mama John

Light at the end of the tunnel