An operation in Auckland in 2008 to improve the eyesight of Fijian-born Vimla Wati almost cost her vision altogether. 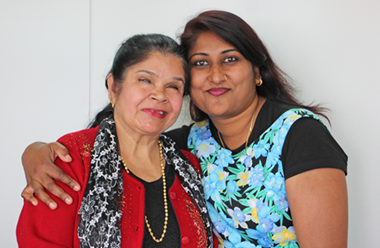 “When I was staying with my brother and sister-in-law, I could still do the housework for them,” she recalls.

“The operation was supposed to make it even better, but made it worse. Lucky I have the support of Pacific Homecare to help me.”

Vimla was born and raised in Labasa, Fiji. She spent much of her life taking care of her parents, but when they had both passed away, she was encouraged by her brother to live with him and his family in New Zealand. She did so in 1999.

Her PHC Support Worker Rehana Gardiner helps her with showering and housework. Rehana regularly takes Vimla for walks at the Auckland Botanical Gardens in Manurewa, a popular destination as it’s within walking distance of her Redwood Heights home.

Vimla’s lack of vision hasn’t prevented her from enjoying an active social life, as she enjoys shopping and regularly attends a number of local Diwali events.

Like Vimla, Rehana is of Indian descent. The PHC Support Worker admits the pair are often asked if they’re mother and daughter.

“It happens when we go shopping … and Vimla loves shopping,” says Rehana.

“She’ll often want to go into every shop. She’s a bit cheeky, too and is always asking for extra hours together. I like her because Vimla’s always positive, despite what happened to her.”

Dengue Fever Cases in Auckland on the Rise