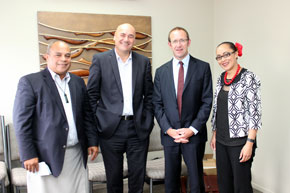 PHC CEO Hamish Crooks provided a history of the organisation which began as a small Cook Islands voluntary group more than quarter of a century ago, and today has more than 330 workers providing homecare for the elderly and disabled.

He spoke of its transformation from having less than 3% of its workforce with certified qualifications to 75% thanks to its workplace literacy and training programmes, but added the challenge was being truly able to pay staff what they’re worth with the funding available.

Andrew Little was sympathetic to their plight.

“It’s a challenging industry because the need for personal homecare is growing and is only going to continue to grow,” he says.

“You’ve got a lot of hard-working dedicated people in the industry. What I’m pleased about is Pacific Homecare’s investment in training and teaching skills to do the job. But we’ve still got a long way to go to make sure the pay rates for homecare workers are actually at a realistic level for them to get by.”

And Little is adamant an organisation with a targeted Pacific focus is still needed.

“The skill level, empathy and compassion required is not a job just anyone can do,” he says.

“The other issue is that homecare to a targeted group of people, such as Pacific, is still required because you do need a good understand of the cultural issues. It’s great we have an organisation like Pacific Homecare that can do that.”

Hamish Crooks says it was a privilege to host the new Labour Party leader and be able to raise issues and challenges regarding the industry and South Auckland.

“He certainly gave us a good listening ear and empathy around some of the issues we raised,” he says.

“Our hope is that he’s able to take those issues and work through them for what’s possible.”