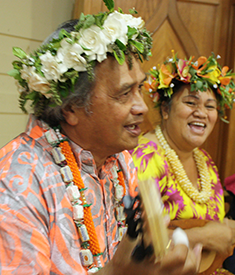 “Metua has connected me to friends old and new! My wife encourages me to go to Metua because it’s good for me..”

He especially enjoys connecting with old rugby mates from back in the islands.

Originally from the Cook Islands on the island of Mauke, Papa Pokoteas story is no different to the stories of many of us Pacific Island people. At some stage in our life we as parents make the decision to move to the land of milk and honey.

Married to primary school teacher Norma, who hails from the island of Magaia in the Cook Islands, Papa Pokotea and Mama Norma moved to New Zealand in the year 1981.

The young couple settled in Auckland where Mama Norma continued working as a primary school teacher and Papa Pokotea a boat builder.

Parents to six children (five girls and one boy), the couple worked tirelessly to purchase a place they could call home. Finally settling in Otahuhu. All grown up, the children eventually moved on to raise families of their own.

About A year ago, Mama Norma and Papa Pitomaki’s grandchild was diagnosed with Rheumatic Fever. This meant that their son and his family would have to leave their home in Hamilton and return to the home they were raised in, in Auckland to attend medical follow ups.

With household numbers reaching the double digits, it’s safe to say, life can get busy for mama and papa.

Introduced to him by a friend, Metua Pakari was a welcomed outing for Papa Pokotea.

Socialising with the mama’s and papa’s and participating in the activities organised by the programme is a great way for him to enjoy some down time.

“Metua has connected me to friends old and new! My wife encourages me to go to Metua because it’s good for me..”

Funded through Whanau Ora, the Metua Pakari programme embraces and celebrates the Cook Island culture. It incorporates instrumental programmes for the elderly, such as, how to remain active, health tips, budget advise, community work, and most importantly community connectedness and companionships.

As well as offering a platform for social engagements and connectedness, Pacific Homecare have been blessed with funding through Whanau Ora to be able to help our mama’s and papas with day to day needs. This can include, shopping, transport, help with the grand-childrens uniforms, etc.

Whanau Ora has been a much-needed blessing for mama Norma and Papa Pokotea in this time where the household population has increased significantly.

“Things can get pretty tight at home and having the privilege of Whanau Ora support has certainly made it a little more manageable. Especially when ‘back to school’ season comes around. “ says Papa Pokotea

He adds, “Socialising is the most important reason I go to Metua not Whanau Ora, but Whanau Ora gives me more confidence with my struggles”.

Leaps and bounds with Ashhia Aziz