A keen learner, Susana took up driving lessons at the age of fifty. In her seventies, she and Liusuavai attending English classes at Te Wanaga O Aotearoa in Mangere, just as a ‘fun’ class to brush up on their English. 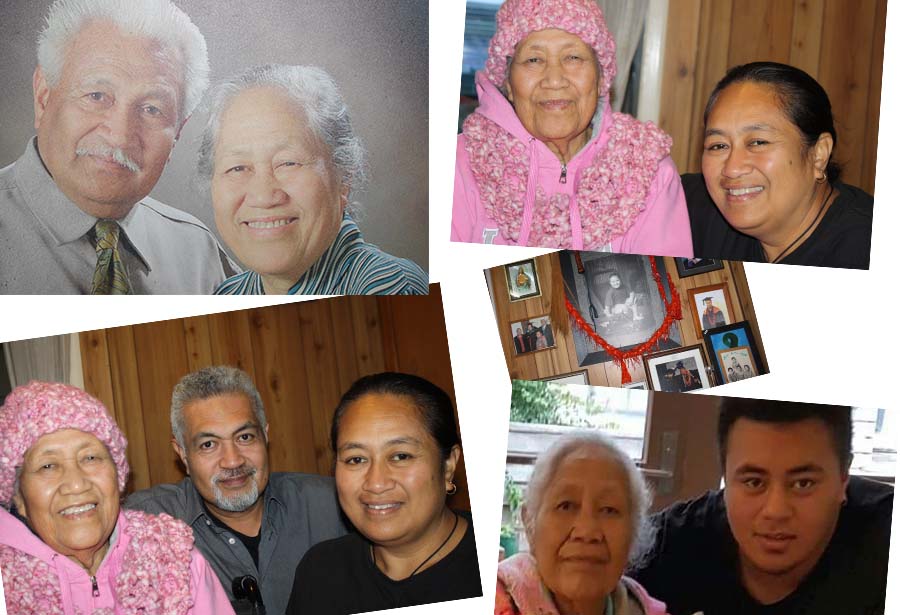 Susana and Liusuavai first arrived in New Zealand in 1966 with their four children. Born and raised in Samoa, this young couple made the brave decision to move to New Zealand in pursuit of a life with better opportunities for their children.

The move to New Zealand was made a little easier with the help of Aunty Fenika and Uncle Matafeo who opened up their home till the family were able to settle into a home of their own. They later had two more children and the nuclear family was complete consisting of three boys, three girls, mum and dad.

Liusuavai was a good provider and a hard worker. He was good with his hands and worked mostly as a labourer for various companies. Susana was an avid reader who was qualified as a Teacher and a Nurse back in Samoa. A hard worker herself, she took a job as a machinist in a sewing factory before becoming a Nurse Aide in National Women’s Hospital.

While working as a Nurse Aide she brought her two sisters over and put them through Nurses training in the same hospital. She later completed teachers training at Epsom Teachers College which led her to her teaching job in Fairburn Primary School in Otahuhu.

For Susana and Liusuavai, Education was the key to success in life. Culture their moral guide; and religion their grounding.

Despite their struggles the couple understood the importance of a good education and spared no expense when it came to supporting their children on this path. Education for them was wholistic and included creative learning (all six attended various music or instrumental classes such Piano, Violin, Accordion, Opera singing), and social etiquette which was predominantly led by Liusuavai and included respecting others and their cultures, being polite, how to treat guests in your house, etc.

The children had a voice, they were allowed to explore and experiment and learn their way. T.V was never a favourite for Susana so spare times in the household was spent reading, talking, singing, playing games, etc.

They were heavily involved in their church community and seen as leaders within these communities. Having attended a seminary course Susana’s involvement included prayer meetings, lay preaching, and Loving and Caring group.

The entrenched importance of education has led to the success of all six children who have completed schooling with either a bachelor’s degree or Masters in the fields of Education, Psychology, and Social Services.

A keen learner, Susana took up driving lessons at the age of fifty. In her seventies, she and Liusuavai attending English classes at Te Wanaga O Aotearoa in Mangere, just as a ‘fun’ class to brush up on their English.

Sadly in 2010 the family’s faith and resilience were challenged when both Liusuavai and his oldest son passed away.

Liusuavai had been suffering from Cirrhosis for a time and was primarily cared for by Susana, however, after the loss of his oldest son to Lymphoma cancer Liusuavai weakened significantly and passed in that same year.

It is never easy for a parent to bury their child let alone their husband in the same year. This had an adverse affect on Susana who had also lost her two younger sisters and two younger brothers in the years following. She remained strong for her family but the pain and sorrow eventually took its toll.

In 2017, Susana had a massive stroke which affected her left brain and paralysed the entire right side of her body. Susana still lives in their home in Mangere with her daughter Ruta and her twenty-one-year-old grandson who are the primary care givers.

While Ruta and Fau’ula are the primary caregivers, Susana’s other surviving children, grandchildren, sisters-in-law, extended relatives, and church family all rally to help as they are able. Masi (Kirisimasi) Susana’s second eldest son has moved back to Auckland to help Ruta and Fau’ula with the day to day care of mum.

With their homes in Australia, Alaska, and various parts of New Zealand the children make a point to return to the home they all grew up in at least once every two years to enjoy time together with their mum and grandmother. Susana has been blessed with six children, twenty two grandchildren and sixteen great-grandchildren.

Thanks to Aunty Afioga who has shared her experience working in a rest home and trained the primary carers on how to handle Susana without hurting her or getting hurt themselves. Susana visits the rest home at least once a week for a bit of social therapy so long as Aunty Afioga is not too far away.

Pacific Homecare Support Workers Silia Kolotau & Violeti Makasini also pop in once a day each for personal care. Both Support Workers have been given the ‘thumbs up’ by Susana with a special smile added for Silia for the outstanding level of service she provides.

“Mum loves Silia. She always has a big smile whenever Silia walks in” Ruta comments.

The family would like to thank “Te Wananga O Aotearoa in Mangere and principal Karen Mose and Deputy Principal Brenda Woolley at Southern Cross Junior School who have all allowed my son and I to take time off to look after Mama when she becomes very ill”.

A quote from the bible shared by Ruta on behalf of Susana
“God has shown us, Oh people what is good. And what the LORD requires of us. To act justly and to love mercy and to walk humbly with our God”. Micah 6:8