Family is important to Mohammed Intaz. The desire to be closer to his young family in Papatoetoe after working for nine years at a produce company growing tomatoes in Pukekohe was a key motivator to seek a position with Pacific Homecare. 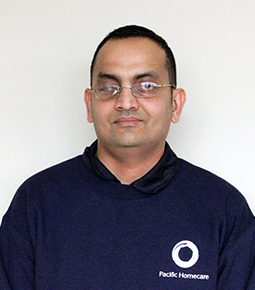 Another was Pacific Homecare’s own family values.

“My sister Rovina works at Pacific Homecare and she said it’s a good organisation to work for because the work they do helps families.”

Mohammed, a qualified accountant by trade, came to New Zealand from Fiji with his family in the late 1990s for greater opportunities. But finding a position that suited his qualifications was a challenge. His first job was at a panel beaters company before he moved to Status Produce, doing a number of manual duties in its glasshouses.

Of Fijian-Indian descent, Mohammed enjoys his role because of the variety of cultures among the clients he works for.

“I have six clients and they include pakehas, Samoans, Tongans, Chinese and Indian,” he says.

“I enjoy looking after all of them and listening to stories of where they come from. I’ve learnt a lot about their cultures.”

But that enjoyment hasn’t lessened his desire to utilise his qualifications from Fiji at Pacific Homecare.

“I’ve done my level one, two and three certificates, and would eventually like to move into the office side of the business. I make the most of what I do, with an eye towards what is next,” he says.

“That’s why I’m so happy to be chosen as Employee of the Month. I’ve been wanting it for a while. Being chosen is a sign that the hard work and care I put in has been recognised by my employers. Thank you Pacific Homecare. ”

Following the customer with Pusi Sa

An Advocate for our Customers