As a regular fulltime reliever for fellow Support Workers at Pacific Homecare, Ainise Toupili enjoys the variety of her job. 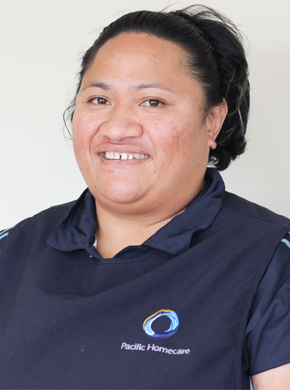 “Sometimes I’ll have a week where I’m meeting a new client every day,” she says.

“At other times I’ll look after a client for a week while the regular Support Worker is away. It’s nice that you get to know them a bit better, but I still like the variety I have.”

Ainise was born and grew up in the village of Pe’ekiu on Tongatapu, the main island of Tonga. She’s one of 10 children and first came to New Zealand as a 17-year-old. She liked it so much she decided to stay and settle in South Auckland, doing a variety of jobs including a check-out operator, cleaner, packer and store person.

When Ainise heard that an aunty worked for Pacific Homecare, she found out about the Support Worker’s role and immediately decided it was for her.

Another bonus is the way the organisation looks after its workers.

“I’ve worked for places where there’s very little contact with the bosses,” she says.

“But that’s not like Pacific Homecare. You always feel welcome when you go in. Hamish (Crooks – CEO) and the management team treat us well and they expect us to bring that same attitude of respect and care to our clients.”

Which means she’s always prepared to step in to relieve a Support Worker, no matter how short is the time she is notified.

“No matter how little time I have, I know I have to be ready with a smile.”

Beyond the call of duty