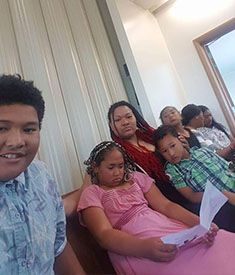 Life sure can throw some major curve balls sometimes! it takes a strong character to come back from them………. and to come back stronger.

As the great poet, Rumi said, “Life is a balance of holding on and letting go”. Our customer story this month is an inspiration to us all.

Originally from the Kingdom of Tonga in a village called Matangiaki, Amelia Fatani moved to New Zealand in 1997 at the young age of 17, where she met and married the father of her children. She enjoyed a good life living over the shore (North Shore) as a stay at home mum, surrounded by a strong support network which was made up of family and friends from both sides of the family.

This all changed in 2012, when the couple separated.

Following the separation, Amelia tried to tell herself that being separated from her husband while still remaining connected to the same support network would work, but over time she realised, staying would risk replacing the good memories with angry, bitter ones.

After some deliberation, she came to the heart-breaking realisation that in order to make a fresh start she needed to move away from the familiar.

Finally biting the bullet, Amelia engaged with Housing NZ to help find a home and with Work & Income for financial support for her and the children. Once everything was organised, she and her children moved to their new home in South Auckland to begin a new journey.

Here she literally needed to start from scratch. The move sparked a complete lifestyle change for Amelia. She had stopped smoking, drinking, and socialising as she did previously. She was an exemplary mum who left no stone unturned to provide the best for her six children.

Despite the financial support from her ex-husband, life as a single mum was a significant struggle, petrol on the odd days, shopping, and the unending needs of children ranging in age from day-care to high school.

Ever observant the staff at Rongomai School noticed that some assistance was needed for Amelia and the children and immediately recommended Whanau Ora with Pacific Homecare.

While waiting to be contacted by Pacific Homecare she took on odd jobs working evenings and early mornings as a driver for contractors. This was short-lived following an accident in the home while she was at work resulting in one of the children suffering minor burns.

Further blessings were bestowed upon Amelia when Whanau Ora Navigator Emmily Samuel gave her a call to begin the process of support from Whanau Ora.

“I can get better sleeps because Whanau Ora gives me peace of mind. I would never want to take advantage of it”

Encouraged by the ‘Start Your Own Business’ Pacific Homecare workshop, Amelia ran a small business selling BBQ for a short while, which was a tremendous help with those critical expenses at the start of the year, such as School Uniforms, stationary, etc.

Today, Amelia has a great relationship with her ex-husband and all their combined friends and families in the North Shore. She continues the grind for her children while still working towards the goals set with Emmily. Her children are thriving with the eldest gaining her license and getting excellence in NCEA and the younger ones are growing into beautiful strong-minded individuals.