Born and raised in Fiji and of Indian descent, with a lengthy and successful career behind him, Shiu Chaudhry thought he and his wife Keola would always live there. 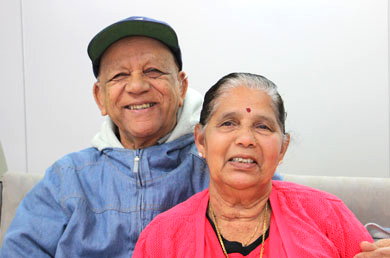 “I was lucky enough to work for a number of big companies in the Pacific like Burns Philp, the South Seas Company and Fiji Forestry where I was the foreman in the 1970s supervising some very big forestry machinery,” he says.

“I got steady promotions and every second year we’d come to New Zealand on a holiday.”

“I was very well off in Fiji, working in the capital Suva, owning my own house and living happily with my wife Keola (through a traditional hindu arranged marriage 55 years ago) and children. We were devoted to our church and believed God was looking after us.”

The first military coup in Fiji led by Colonel Sitiveni Rabuka in 1987 changed all that. Fijian-Indians, who had been part of the fabric of Fijian life for more than a century as part of the indentured labour migration from India, felt threatened.

Their children, who originally came to New Zealand to study, decided to stay. They asked their parents to join them. In the early 1990s they finally did.

Shiu continued work for a few years in casual jobs but as he got older he developed heart problems, requiring a bypass operation. Keola would also have difficulties with her heart.

They’re now both firmly in retirement, living contentedly in an apartment unit just down the road from Pacific Homecare’s offices in Papatoetoe. Their son and his family live around the corner. As clients of Pacific Homecare for the past four years, they love it.

“We have some very good Support Workers, like Krishna and Ragni … they look after us,” says Shiu, who likes spicy curried vegetables and noodles his Support Workers prepare while Keola loves the vegetable roti cooked for her.

They also enjoy walking, but appreciate the transport that’s provided when needed.

Pacific Homecare provides support five days a week with the family looking after the pair during weekends. For Shiu, it’s a perfect fit.

“The staff are friendly and I’ve also met the boss, Hamish, who is also friendly and talks to us. We like Pacific Homecare because it’s friendly and it’s local.”