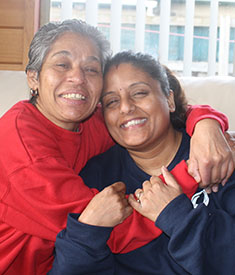 “I began by enticing her with her favourite things for example, she likes chocolate, so I told her that chocolate comes out of the shower head. She also likes flowers, so I made her peep out the window to look at the flowers in the garden and asked her if she wanted to smell them.”

Walking in through the front door for the very first time I am greeted with a great big smile followed by a warm bear hug from a very smartly dressed Ashhia; followed closely by 94-year-old dad, Abdul who greets me by, cupping my face and planting a kiss on either side of my cheeks and a hug, as if to say, “thank you for coming to see us”.

This may seem like a simple unceremonious act to the rest of us; but for 51-year-old Ashhia Aziz, this act alone was a milestone.

The youngest of 7 children, Ashhia had always remained very close to her parents. Taking up the role of assistant, nurse, and carer for mum and dad since the tender young age of 7 years old.

Ashhia was just 45 when she lost her mum and best friend to Cardiac Arrest. This immediately sent her through a whirl spin emotionally, eventually landing on deep depression.

In her grief she found solace within the four corners of her bedroom, eventually developing a fear for water and sunlight.

Two years ago, after intervention from a local Social Worker, Ashhia was referred to Pacific Homecare for personal care. At this point she had not had much interaction with people, nor had she seen sunlight or visited the shower in as many years.

Raagini immediately took a shine to Ashhia and vowed to work with her to restore some independence.

“when I first met Ashhia, she was so happy to see me, but I could tell she had not showered in a while, at that point I made it my goal to work with her. To bring her out of her shell more and restore some natural hygiene habbits.

I began by enticing her with her favourite things for example, she likes chocolate, so I told her that chocolate comes out of the shower head. She also likes flowers, so I made her peep out the window to look at the flowers in the garden and asked her if she wanted to smell them.

All these little things I kept introducing each week has been good for her.” Says regular Support Worker Raagini

The difference in Ashhia today is overwhelming. Confident, content, big smiles, and chatty. Her greeting as I walked in the front door is a testament to that.

Ashhia lives with her dad Abdul in a cute little cottage style home close to Papatoetoe, owned by her brother. She now enjoys regular walks out in the garden while 94-year-old Abdul does his gardening. She loves receiving visitors and most especially looks forward to her Support Workers.

Today, both Ashhia and Abdul attend Pacific Homecare’s Fia Ola programme every Wednesday at the head office in Papatoetoe, where they enjoy the company of fellow homecare customers, good yarns, great music, and yummy food.

Mental disorder including depression can have a devastating effect on a person and their family. The 2016/17 New Zealand Health Survey found that: one in six New Zealand adults had been diagnosed with a common mental disorder at some time in their lives. A little love, care, and kindness can go a long way to helping them see hope again.

If you or someone you know is struggling with mental health, just know that you are not alone. There is a support network always available to listen. You can reach them here: https://www.mentalhealth.org.nz/get-help/in-crisis/helplines/

Give it up this World Smokefree Day

The humble life of Susana Galo