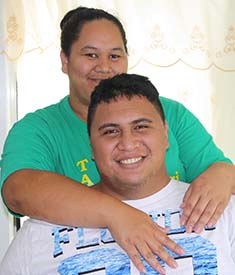 Prior to the accident, Nga was a telephone technician who would travel regularly. At the time he went to Aitutaki for some contract work. He left his partner of up to 6 years Tuagaru (Vavu) Clyde and their one-year old son Ngatokora Shane Tiavave (Darling) behind in Rarotonga to fulfil this contract.

On February fourth 2017, Twenty-six-year-old Nga Simone was paralysed after a devastating scooter accident in the Cook Islands.

Prior to the accident, he was a telephone technician at the time and went to Aitutaki for some contract work. He left his partner of up to 6 years Tuagaru (Vavu) Clyde and their one-year old son Ngatokora Shane Tiavave (Darling) behind in Rarotonga to fulfil this contract.

On the night of the accident, Nga’s partner was contacted by her sister-in-law. She flew over the next day to be with him. A few days later, he was transported to Rarotonga for inpatient care. Unfortunately, there was no facility for a wheel chair bound patient in Rarotonga hospital so Nga had to be transferred to Middlemore Hospital in South Auckland.

At this time Nga was only able to move his eyeballs. After an initial check, the doctors had confirmed Nga’s worst fears. The doctors confirmed that he was paralysed from the neck down with no hope of movement.

Nga spent five months in the Spinal Unit in Otara getting used to life as a tetraplegic. During his time here, through the grace of God, Nga made significant progress when his speech improved, and he was able to move his head, shoulders and arms. As a result of this progress he was kept at the Spinal Unit for so long.

From the Spinal Unit, Nga was transferred to Laura Fergusson Rehabilitation to begin exercise and physiotherapy sessions.

His primary carer, partner, and mother to their one-year old child is Taugaru (Vavu) Clyde. The couple met in Aitutaki around six years ago at a Sports Academy where both participated in Rugby . Vavu is a twenty-five-year-old dedicated wife, mother, sister and daughter. She left her job as a Police Officer in Rarotonga to support Nga through his recovery in New Zealand. She spent the last few months working towards building a stable life here in New Zealand so they can be reunited with their son again.

What makes this story incredible is the tremendous amount of family support. Vavu’s whole family came over to New Zealand to support both Nga and Vavu. Vavu is the middle of seven children, five girls and two boys. After the accident, Vavu’s dad quit his job as a prison warden and moved across with his wife (Mama Clyde) to be with the couple. Not only did her parents join them, they were also accompanied by two of Vavu’s sisters (one with a family of her own) and one of her brothers with his girlfriend. Vavu also had one sister who lives here in Auckland with her family. She was also part of the support committee. With no home here in New Zealand, they stayed with family members and made sacrifices to maintain peace in the homes of the families they lived with. They would spend a large majority of their time in the hospital and/or rehabilitation centres to ensure both Vavu and Nga had all the support they needed.

In January this year, the couple were blessed with a perfectly suitable house they could call home in Glenn Innes. With Nga’s increased independence and support from Pacific Homecare (PHC) Support Worker Moana Misa, some of the family returned to their home in the Cook Islands while Mama and Papa Clyde remained in New Zealand, along with one sister who is due to return in the next couple of weeks.

This is truly something special and a testament of, not only the kindness, love, and generosity of the Clyde family but also for the character of Nga to gain the respect and support of this wonderful family.

Nga comes from a small nuclear family of four. Mum, dad, and one younger sister. However, I think it’s safe to say that the Clyde family are an extension of that.

“Nga was a real good fisherman. He would go out fishing whenever he could and bring back his catch to sell for extra cash to support his family. He would go out to the reef to pick crayfish when it was in season, so he could sell it in the markets.” Says Mama Clyde

She also added ..“He was a very good provider. He even had a fruit and vegetable garden that supplies some of the local restaurants for a little bit extra cash. All of this on top of working full time. He’s a good boy, that’s why we did not hesitate to come here to support him through recovery”

The couple were recommended to Pacific Homecare by their Taikura needs assessor as well as their therapist at Laura Fergusson. Everything was organised by the assessor and they were connected with PHC Field Coordinator Amelia Joseph who paid a visit to the family and placed support worker Moana Misa with them. Moana visits seven days a week for personal care for Nga. According to Nga, Moana has been exceptional with the work she does.

“She makes me feel comfortable and is thorough with the personal care” he also added with a cheeky laugh, “She deserves more money! I wouldn’t recommend her to anyone else, so she doesn’t leave us.” Says Nga

They are finding it much harder living in New Zealand however, the togetherness and support has become the silver lining for this family.

Part of the change