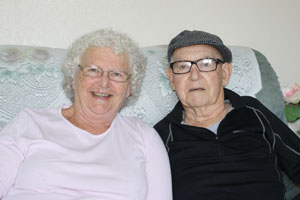 Life has been eventful for South Auckland couple Ian and Raewyn Hart, who met in an op shop in Waiuku where Ian was working. Their wedding day was no exception, with their hot water cylinder bursting unexpectedly on the special day! We share their story.

Ian and Raewyn Hart may have been raised in different parts of New Zealand, but they had one thing in common growing up as middle children in large families.

Born and raised in Foxton, Manawatu, Ian grew up in a large farming family, right in the middle of nine children.

“Dad was a dairy farmer and as you did in those days, the whole family ran the farm,” says 77 year old Ian.

Wife Raewyn was raised on the outskirts of South Auckland.

“I’m a simple gal from South Auckland. I was born in Manurewa but lived the most part of my life in Waiuku,” she says.

“There were five of us in the family, two boys and three girls, and I was the middle child.”

The couple met a bit later in life, when Raewyn was 40 and Ian was 50.

“After my first wife passed away I didn’t think I would find anyone again,” says Ian.

“But then I met Raewyn.”

Ian had been a farmer most of his life up until he met Raewyn while working at an op shop.

“We met in Waiuku where I was working at an op shop. Raewyn came in with a friend and things just happened from there,” says Ian.

“It hasn’t always been easy” says Raewyn…“but it has been rewarding”.

Their wedding day was eventful to say the least.

“Our wedding day was interesting! We gave our families one weeks’ notice and it was a very simple ceremony at the Salvation Army Church in Pukekohe on a Sunday morning,” says Raewyn.

“It was so funny, the day of the wedding our hot water cylinder burst. Luckily our neighbour at the time was a plumber so he kindly popped over to help us out.”

Then at the age of 49 Raewyn decided to complete her Bachelor of Social Services.

“After graduating I worked in mental health for a time before I was contracted by ACC doing vocational rehabilitation,” she says.

“At this point Ian was too ill to work so I was the bread winner for the family.”

“We had a needs assessor visit and they presented us with a list of homecare providers. We’ve always been around Pacific Islanders so the name ‘Pacific Homecare’ appealed to us.”

The couple receives a combination of personal care and household support.

Ian’s Support Worker Tui helps with personal care including showering, dressing and tidying up the bathroom after use.

“Nobody can do anything any better than Tui. He knows me so well,” says Ian.

“He’s sure to dress me the way I like all the time – he needs double pay!”

“Malia cleans so well, the place is spotless,” says Raewyn.

Raewyn is also thankful for the district nursing support they receive in addition to Pacific Homecare.

“The district nurses have also been just wonderful. They call in twice a week and even connected us with Hannah who assisted us with Advanced Care Plan,” says Raewyn.

The couple enjoys spending time at home together.

“I like to do a little bit of gardening or reading,” says Raewyn.

“Now one of my favourite things is my chair. It’s an electric chair that goes beyond the lazy boy – it moves all the way up to standing position!” he says.

“I don’t need to be assisted to sit or stand each time – it’s the best gift my family have given me!”
And it’s a large family at that.

“We love having the family pop in to visit.”