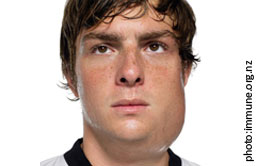 Mumps is a viral illness, which can cause swelling and tenderness of one or more salivary (parotid) glands. Some people with mumps have no symptoms and others may only have symptoms in other organs, for example, meningitis or inflammation of the testicles (orchitis).

The last mumps epidemic in New Zealand was in 1994, with 188 hospitalisations. 20-30 cases of mumps are still notified each year; approximately half are in children under 10 years of age.
How you get it
Mumps is spread through the air from person to person by coughing and sneezing, and by direct contact with infected saliva.

The incubation period (time from infection to onset of symptoms) is on average 16-18 days, and can range from 2-4 weeks. A person with mumps may be infectious from seven days before the salivary glands swell until nine days after. The most infectious period is between two days before illness and four days afterwards. People without symptoms are also contagious.
Symptoms
Most children under two years of age have no symptoms when they get mumps. Those who get mumps as an adult are more likely to experience severe disease.

When symptoms are present they usually include; fever, headache, malaise, muscle aches, poor appetite, swelling and tenderness of one or more salivary glands (just below the ear lobe). However, some people have symptoms in organs other than the salivary glands. For example mumps meningitis may present as headache, sensitivity to light, neck stiffness, fever and/or vomiting.

On average, fever usually lasts one to six days, but salivary gland swelling can last for more than 10 days. It usually takes between six – 18 days from exposure to the first symptom, ranging from 12-25 days.
Treatment
There is no treatment for the mumps infection. Management of symptoms is focused on improving comfort.
Risks

Unvaccinated adolescents and adults are most at risk, and are more likely to experience severe mumps disease and complications
Viral (mumps) meningitis occurs in up to 15% of mumps cases, long term consequences are very rare
Temporary deafness to high frequency sounds occurs in 4 in 100 cases. Profound and permanent deafness is rare, usually on one side, and occurs in 1 in 15,000 cases
Orchitis (inflamed testicle), usually one sided, occurs in 20-25% of post-pubertal males. Oophoritis (inflamed ovary) occurs in 5% of post-pubertal females. Sterility occurs rarely
Encephalitis (brain inflammation) occurs in around 1 in 6,000 cases
The overall case fatality rate from mumps is about 1.8 per 10,000 cases
Inflammation of other organs, such as pancreas, nerves, joints, breast, kidney, thyroid and heart, is possible
Pregnant women who get mumps during the first trimester of pregnancy have an increased risk of miscarriage, but there is no evidence that mumps causes fetal abnormalities

Prevention
Immunisation given on-time is the best method of preventing mumps. The measles, mumps, rubella vaccine (MMR) is given as part of the immunisation schedule at 15 months and 4 years of age. No mumps-only vaccine is available in New Zealand.

People with mumps are excluded from early childhood education, school and work until nine days after the appearance of swollen salivary glands to protect others from infection.

Contacts of mumps cases, who are not immune to mumps e.g. those who are unvaccinated, are excluded from early childhood education, school and work until 26 days after the appearance of swollen glands in the last case they were in contact with.
Complications of disease

More severe disease in adults
Deafness
Inflammation of the testicles and ovaries in adolescents and adults
Viral meningitis in up to 15 in 100
Encephalitis
Risk of miscarriage during early pregnancy
Death in less than 2 per 100,000 cases

This information is sourced from the Immunisation Advisory Centre

A life of sacrifice