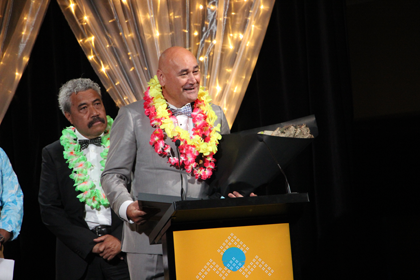 With a passion for community and economic development work in relation to Pacific communities, Hamish Crooks has been the Chief Executive of Pacific Homecare since 2010.

An established and respected Pacific leader of Cook Islands descent, Hamish credits the recognition to his mother Tuainekore.

“She came to New Zealand in 1946, serving her community in Tokoroa through voluntary work with housing and the justice system, as well as her 25 years as treasurer of the Church,” he says.

“She is my No 1 mentor and the reason why we maintain a legacy of serving the community and passing those traits on.”

Hamish also paid tribute to “those people who work alongside me day-in and day-out, not only at Pacific Homecare, but all the organisations I’ve been involved with over the years.”

Sponsored by Pacific Business Trust, the Pacific Enterprise Award recognises a Pacific person who understands and participates in the modern economy creating opportunity and jobs for Pacific people in the way that Hamish Crooks has with Pacific Homecare.

This is the second year the SunPix Awards have run, which distinguishes and includes a wide spectrum of the community in New Zealand.