Lucy Latu has only one regret about joining Pacific Homecare as a Support Worker in 2011. The Niuean-born mother of two wishes she had joined sooner. 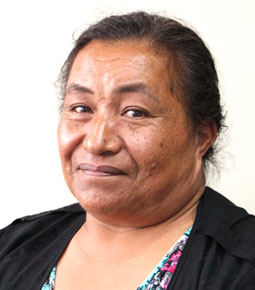 “I love my job and helping people of all different cultures, especially the elderly,” she says.

“But I wish I had known about Pacific Homecare earlier, because I would have known how to look after my Mum and Dad better when they were still alive.”

Lucy, originally from Alofi, came to New Zealand in 1984 as a 19-year-old. Despite being one of the youngest from a family with 10 siblings, she took on the responsibility of taking care of her parents.

“I was working and trying to raise my own kids. I needed some help to look after Mum and Dad, but was told by other family members that they were too busy,” Lucy recalls.

“That responsibility made me angry at my parents when I shouldn’t have been. They were suffering from Alzheimer’s, which made it even harder. I didn’t know anything about it. When I started working at Pacific Homecare after mum and dad passed away, I had training which helped me understand what it (Alzheimer’s) does to people when they get older. It taught me how to be more patient, calm and understanding.”

Growing up in Niue, Lucy says the sea was as much of a playground as the rugged land, with regular swimming and fishing.

But like the vast majority of Niueans, the desire to join her family in New Zealand and earn money was too great to resist. Lucy’s first job when she came to New Zealand was as a nanny to a Kiwi couple in Wellington who had lived in Niue.

Family brought her to Auckland, which has been her home for almost three decades. She’s had many jobs, mainly factory work, before taking a break to start a family.

On thinking about her return to the workforce, Lucy wanted a change of career and applied to train as a homecare worker.

It has ended up being the job of her dreams. She has a number of clients and her duties include household care including cleaning and providing personal care in their homes.

With a mother who was half Samoan and marrying a Tongan when coming to New Zealand, Lucy is able to speak all three Polynesian languages fluently, which is certainly an asset at Pacific Homecare.

After more than four rewarding years at the organisation, being named as Employee of the Month for November is a genuine highlight.

“When I’d come to the Pacific Homecare office for workshops, I’d always look at the pictures of the Employees of the Month on the wall and wish that I was there, too,” she says.

“It’s nice to finally win it because I always try to do what I learn at training for my clients. We are about love, care and professionalism.”

A Relief for others